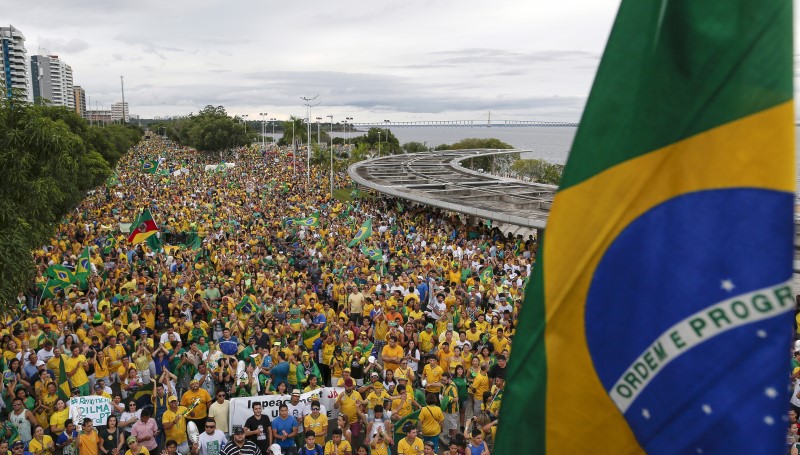 I was born in Brazil, my Brazilian Brazil, as a song sings. I’ve decided to write about it today, this country where everything is happening. I feel a mix of complete unbelievability and a sense of hope, although I’m not sure about the Olympics at all.

Brazil is falling apart and at the same time creating the roots in which the country might get reconstructed. To my work colleagues, the protests of Sunday last, 13th March, look like big parties, and they probably were.

They were peaceful, there was dancing, I’m sure there was singing of political rants, booing the current president and the former president, both from the workers party; although most of these people on the streets, were the same who voted for them. They lost faith. The defence of the two presidents is to say that this is a scheming technique of the rich people and the opposition to burn them. It isn’t. What the protests are about: against corruption in all parties, about justice for all, rich and poor.

In 2013 there was a large scale protest, at the time I was disappointed because when I enquired what the protests were for, I saw each person was protesting for something they thought was worth it, there was no unified front. It was about the money spent for the construction of the stadiums for the Fifa World Cup, about the state of the health system, about the increase in the price of bus tickets, about the educational systems. These were all valid reasons, but without focus there is no strength.

Sunday, the story was completely different; it was about corruption and that brought record numbers, a protest as my generation has never seen. It filled my heart with happiness to see this movement, a pride I might not have the right to feel, since I’ve left Brazil 12 years ago to embrace the Australian ways. Because I felt like an alien in my Brazilian culture most of my life, more so when I became an adult and had to function inside the work force. I left, I found a place where the rules and cultural subtleties are closer to my heart.

Brazil released a big shout against Corruption! It was amazing to see, although there were different little points, they were about honesty, supporting the police, the federal courts, it was requesting Dilma’s impeachment (the current president) and crying for Lula’s arrest (the previous president).

The hope is that this movement will recover the pride in being honest. With low salaries that the investigators, the police, the lower legal echelons receive, the lack of resources, the poverty of the Brazilian government buildings and institutions, there isn’t much to incentivise them to keep being honest… but now, a million people here, a couple of hundred of thousands there, in love and pride, that might give them a mission bigger then themselves, anchored in something I thought was completely forgotten… patriotism.

All this chaos started with a single thread, a judge was given the investigation into a car wash which became the nick-name of the investigation (operação lava-jato). A new law was approved around that time that enabled prosecutors to offer reduction of sentence to condemned people who dubbed on others, if they had proof. That was the thread that pulled all others, they found a link between that and Petrobras, the petroleum state company, and then it never stopped.

In Brazil there is a high level of barely literate people, which makes very hard for them to understand white collar crimes, such as embezzlements and selling of flavours; but when they found that Lula had taken eleven trucks of goods from the governmental house, the Palacio do Planalto, and among them they found gifts of gold and jewels, presents from other countries to the Brazilian people (not the person, the President), the rugs from the house, priceless works of art from Aleijadinho and Portinari, THAT, they could understand, it was the lowest type of crime: thievery.

Ally to that were the ecological disaster in Mariana, which drowned a city and will have ecological consequences worldwide, and the Zica Virus or whatever is causing a spread of neurological diseases, added to the overspending in the construction for the Olympics and the result is that the pot boils.

And when it boils, it boils. It blew an amazing number of people, although I cannot be precise on how many, something between 3 million and 6 million people country-wide.

To every protest two or three head-counts were divulged, the police would publish a very low number, the organisers, a very large number and the researching institute of São Paulo gave us another even lower number, so we don’t really know anything. As always, and as part of Brazilian idiosyncrasies, finding the truth is often hard.

The numbers aren’t anywhere close; for example, for São Paulo’s protest, the organisers calculated 1 million people, the police said it was 500 thousand and DataFolha, the research institute, said 200 thousand. The only thing I can say for sure is that there were a lot of people.

Thank you all my friends and all Brazilians who made the effort, who left the house, who went to a place in green and yellow and shouted against corruption. To all who now feel pride in being honest, I feel this might be a change in the tide. If people can take this pride to their day-to-day lives, it will change the culture, change the country, change the future.

A book is a place where a storyteller can safely let all their chaos, shadows, darkness be revealed in full, and with glee.